You need to accept cookies to use this functionality.
#Beer #ProcessTechnology #Brewing #Sustainability #Europe

Julia Leserer
6:15 min.
Time for some new investment: Kaiserdom has replaced its 50-year-old Steinecker brewhouse by a new, energy-efficient brewing system from Krones.

The links between Krones and the Kaiserdom brewery have a long history behind them: the first Krones machine, a labeller for swing-stopper bottles, was commissioned by the client back in 1959, and since 1968 Kaiserdom has been using a Steinecker brewhouse. Now it was time for newer technologies, automation, and more energy-efficiency: following expansion of the fermentation and storage cellar Kaiserdom has invested in a new brewhouse – and put its trust in technology from Steinecker.

Kaiserdom ranks among the oldest breweries in Bavaria. Founded in 1718, it recently celebrated its 300th anniversary. “But the brewery tavern here has been licensed to serve alcoholic beverages ever since the 14th century,” emphasises Georg Wörner, the brewery’s Managing Partner. Meanwhile, his son Felix Wörner, as the fifth generation in the family firm, has also been actively involved for the past five years, and has recently joined the board. As a typical full-range brewery, Kaiserdom possesses a broad portfolio: from pale ale and pilsner, wheat beer, Export lager and dark beer all the way through to seasonal products like bock and festival beer. No matter whether they’re bottom or top-fermented – all the products are brewed at the main facility in Bamberg, for an annual output of currently 320,000 hectolitres. Besides traditional beers, the company’s range also includes mixed beverages like shandy or energy drinks

In terms of packaging, the privately owned brewery concentrates on glass bottles and cans – depending on the sales region concerned. Whereas in Germany the glass bottle is firmly anchored in the beer market, many other countries opt solely for cans. For its overall success, Kaiserdom relies not only on its domestic sales but on a total of three mainstays: besides national sales of its own beers, the brewery also handles orders in the categories of contract brewing and contract fillingThe third and largest mainstay is meanwhile export business, accounting for around 65 per cent.

Not only rising exports, but also the ageing brewhouse, now demanded some capacity upsizing and a corresponding investment thrust: it was only a few years ago that Kaiserdom had placed an order with Krones for expanding the fermentation and storage cellar with eight new tanks and building a new yeast cellar. Coinciding almost exactly with the change-over at the top, the brewery also continued its collaboration with Krones, and opted for a new brewhouse rated at 150 hectolitres of cold wort. That’s not the only reason why the new acquisition is for Georg Wörner a kind of once-in-a-generation project: “We had already realised in the last ten years that we wanted to replace the brewhouse.” he explains.

So the requirements and goals for the new brewing system were precisely defined: a fully automated brewhouse with low energy consumption combined with a high energy recovery rate, lower personnel expenditure and above all a consistently high beer quality. “Out of the various quotations, we ultimately found Krones’ concept the most persuasive. We got precisely what we wanted: an energy-efficient, automated brewhouse. The only intentional, deliberate manual intervention continues to be the hop strike,” emphasises Felix Wörner.

The new brewhouse replaces a still-trapezoidal Steinecker brewhouse dating from 1968. At the same time, Kaiserdom thus increased its capacities to ten brews per day, thus achieving a 40 per cent higher output of cast wort.

In addition, an EquiTherm Brew energy recovery system has been integrated, which ensures maximised energy-efficiency.

Because the old brewhouse, including the building, was to be demolished and a new one built, this could only be done in the operationally quiet period between late autumn and spring. After the last brew had been run at the end of September 2018, the project team immediately began on the demolition work. A good six months later, in May 2019, the brewery was back in action with the first brew – so successfully that it was producing sales-quality beer straight away. “Krones delivered everything on schedule, and the construction deadline was met – I believe precisely because the specific worksteps were perfectly coordinated between our people and the Krones team,” summarises Felix Wörner.

From Krones we got precisely what we wanted: an energy-efficient, automated brewhouse. 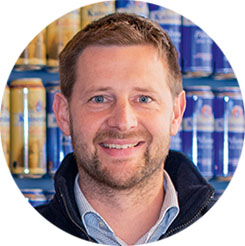 “The big advantage of the new brewhouse is that thanks to the automatic control system a human error can be very largely ruled out. This enables us to achieve a consistently high quality of our beers,” explains Georg Wörner. “And these are lighter in colour, because it’s easier for us to control the heat. At the same time, the temperature can be kept at a lower level. The risk of burning a brew thus approaches zero. When it comes to flavour, our beers are now more rounded, and also, in terms of head quality, perhaps even better than before.”

In order to reduce consumption levels at the energy-intensive process steps, Kaiserdom has integrated Steinecker’s EquiTherm Brew. This system recovers from the wort cooling process all the energy needed for mashing and heating up the wort, thus enabling up to 50 per cent of the primary energy required to be saved. The beneficial side-effect shows up in the quality of the beers: now that the brews are being heated up more gently, the system creates a consistently high level of quality. “Everyone’s talking about saving energy nowadays – and for us, too, operating without EquiTherm Brew would no longer be conceivable,” emphasises Georg Wörner. “Although our figure is currently running at 30 per cent, we aim to gradually achieve savings of 50 per cent using appropriate process optimisation. We’re confident that together with Krones we shall achieve this.”

With the fully automated brewhouse, the staffing level required for brewing was likewise downsized, enabling Kaiserdom to run three production shifts. Because where previously five or six people were deployed simultaneously, thanks to the high degree of automation a single operator can now handle all the tasks involved – from grain intake and wort cooling all the way through to controlling and monitoring the entire brewing equipment. “Thanks to the new brewhouse in conjunction with the fermentation and storage cellar, Krones has enabled us to create an entirely new cost structure,” says a gratified Felix Wörner.

For Georg Wörner, the decision to place the order with Krones was based on three crucial arguments: “Firstly: Krones enabled interfacing problems to be eliminated altogether. Thanks to the “everything single-sourced” principle, the interfaces to the yeast cellar, the CIP systems and to the fermentation and storage cellar posed no problems at all. Secondly: the price. Although Krones was not the most affordable vendor, we found the price/performance ratio persuasive. The third, and for me the most important point was this: my confidence in the sales and project team at Krones. This was based on invariably fair meetings and never-failing reachability,” says a laudatory Georg Wörner. “We see this as a fundamental major plus for Krones: the continuity of our contact persons.”