On the use of rPET in the beverage industry

You need to accept cookies to use this functionality.
#Recycling #Plastics #rPET #Sustainability

There can no longer be any doubt about it today: The circular economy is vital for our future. Closed material loops are among the most important means for getting to grips with the three biggest ecological problems of our time: the scarcity of natural resources, the global litter problem and greenhouse gas emissions.

Nevertheless, there is still plenty of room to improve recycling quotas and the proportion of recyclate used in packaging. The reasons for this are many and varied, ranging from a lack of infrastructure for material recovery and re-use right through to concerns about the quality of recycled materials.

On the other hand, the more untapped potential a certain field offers, the more attractive and worthwhile it is to put it on your agenda. So there are quite a lot of experts at Krones who have dedicated their efforts to finding answers to these questions: How can product packaging be designed for sustainability, produced with a minimum of resource consumption and upcycled after use?

Series of trials with 14 types of PET

One of these experts is Aurelie Börmann. She is a chemical engineer and has been taking part in an interdisciplinary research project at Krones, examining the material properties of recycled PET. The aim: to gain objective and above all verifiable insights into the differences between virgin and recycled PET when each of these is used in beverage packaging. In conjunction with the in-house recycling pilot plant at our Flensburg facility, the project team conducted an extensive series of trials, putting 14 different PET types under the microscope: three virgin PET and seven rPET types, plus four blends, each consisting of 50 per cent virgin and 50 per cent recycled material.

An excellent team: rPET and the Krones Contiform

In 2003, a Dutch customer started to produce bottles containing 30 per cent rPET on his Krones line. Back then, the project was far ahead of its time. In the meantime, bottles consisting entirely of recycled material are also run on Krones lines as a matter of course – even at high speeds, at the Canadian water bottler Ice River Springs, for example.

Based on a predefined set of criteria, the individual materials were analysed in regard to both their processability and the quality and product safety of the blow-moulded bottles. The biggest difference between virgin and recycled PET was found in terms of visual appearance: The preforms and bottles made of recycled material had a somewhat darker, slightly greyish hue. In regard to their technical characteristics, by contrast, there were no deviations. “Be it material distribution, top load, burst pressure or thermal stability, the performance of the bottles made of rPET was just as good as that of virgin-PET bottles,” explains Aurelie Börmann. rPET even proved to be more energy-economical in the stretch blow-moulding process since the darker colour improves the material’s heat absorption. “This effect is sometimes deliberately induced for virgin PET, by adding soot particles,” says Börmann. “rPET inherently possesses this beneficial property.” 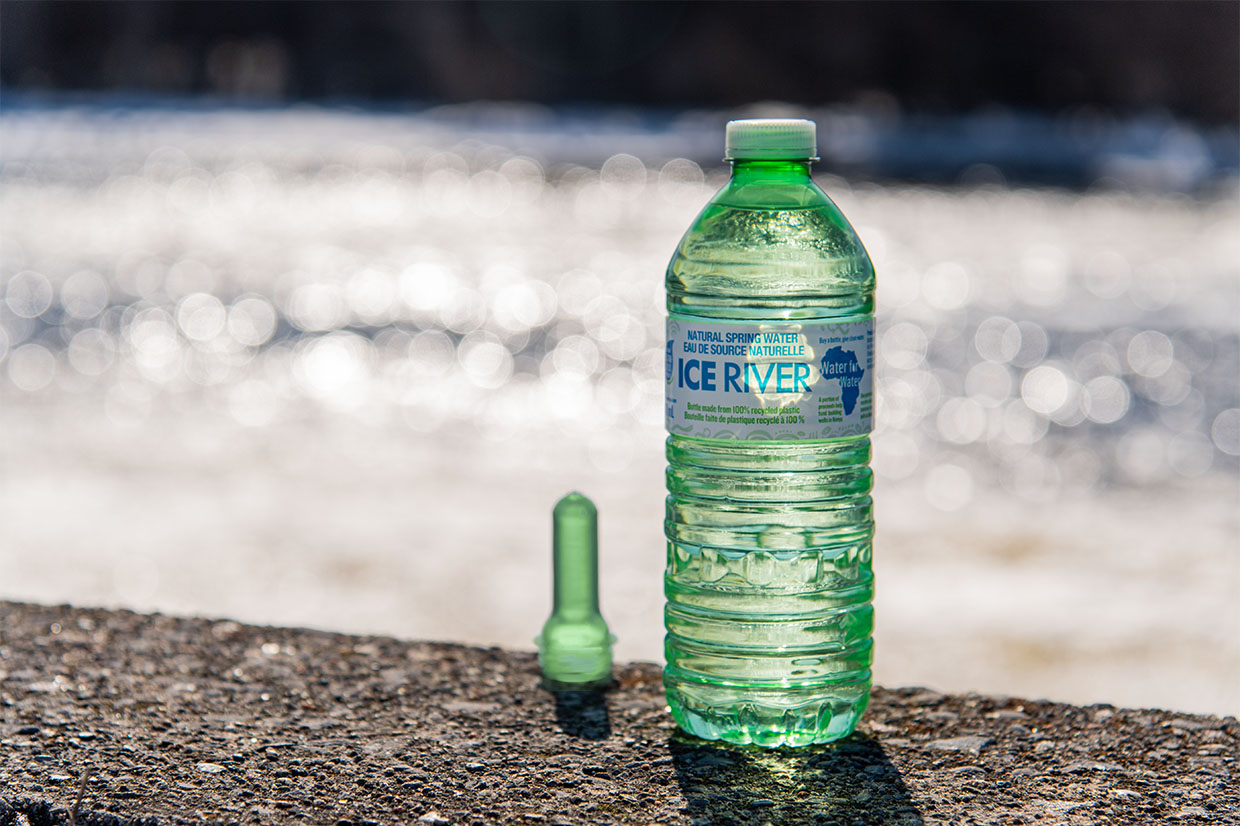 To obtain clarity about both product and consumer safety, the bottles were also examined for substances that are subject to binding limits in the EU because they can migrate from the bottle wall into the beverage. The values measured objectively demonstrate that there is no basis in fact for a certain prejudice that crops up occasionally: “Every now and again you hear someone say that an increasing proportion of rPET would go hand in hand with a rise in acetaldehyde,” explains Börmann. “This most definitely turned out to be a myth.”

So the series of trials has shown that PET remains a valuable resource as a packaging material even after its first use. Keeping it in a closed loop therefore makes sense not only in ecological but also in financial terms as well.

Even though the series of trials was a strictly internal Krones project, the research team will be pleased to share the results obtained with anybody interested from the industry. The most important results and facts have been published in a white paper that is freely accessible. The detailed expertise of Aurelie Börmann and her colleagues is also regularly much in demand at consultancy meetings and for specialist presentations. “We’re very pleased to note that the interest in rPET and sustainable packaging is steadily picking up speed,” she emphasises. “So we are always available to answer any questions that arise on the topic.”

Looking at polyolefins and film

Incidentally, the same applies for the Krones recycling pilot plant since what has so far only been known to a few insiders is this: The experimental plant in Flensburg not only does work for Krones’ R&D but also conducts material tests commissioned by clients. To keep up with increasing demand, the pilot plant last year underwent basic modernisation and upgrading. The MetaPure technology of the latest generation installed there now also makes it possible to test washing processes with relatively large quantities of material – not only for PET but for polyolefins and films as well.

At your disposal for any questions and ideas you may have

Would you like to know more about rPET processing? Or do you have a specific project in mind for our recycling pilot plant? Then don’t hesitate to send us a brief message – our experts will get in touch with you straightaway!