Beer
Line relocation
Back
Line relocation
Share this page
Why buy a new, urgently needed returnable-glass bottling line when in another of the group’s facilities there’s a line that’s not used?

This is what the Carlsberg Group asked itself when pondering how to upsize production output at the Bosman Brewery in Poland. And it found the solution in the form of a new capability from Krones: a complete line relocation job. Admittedly, it wasn’t quite as simple as it may perhaps sound, because the existing line couldn’t just be dismantled and then erected again at its new location. There were numerous obstacles the project team had to overcome, all of which were successfully met and mastered – in record time. In less than six months after the project kicked off, the Bosman Brewery was seeing bottles coming off its “new-old” production line.

Stettin, Poland: The Bosman Brewery is one of three brewing facilities operated by Carlsberg Polska. Because of the rising demand in Poland for Carlsberg beers in 0.5-litre returnable bottles, it was necessary to invest in a second bottling line for returnable glass. “An additional line rated at 40,000 bottles per hour would enable us to satisfy the increasing demand for our beers, particularly during the seasonal peaks. Then we could use the existing 50,000-bph line for our main products, and the new one as a full-range line,” is how Piotr Fornal, Project Manager for the line relocation job and Bottling Manager, explains the basic thinking involved. “We were very satisfied with our existing Krones line. A second line from the same manufacturer would mean that, in the event of malfunctions, we can react more quickly and also harmonise the spare parts stock requirement.”

Samara, Russia: The economic crisis in Russia has caused beer consumption to fall, thus freeing up capacities at the breweries. The Baltika Brewery in Samara, too, a member of the Carlsberg Group, has also been affected, which is why a Krones non-returnable line was available for repurposing.

Ziegelbrücke, Switzerland: The Carlsberg Group’s purchasing and production headquarters in Switzerland realised: while the Bosman Brewery in Poland urgently needed a new line, at the Baltika Brewery in Russia there was a line that wasn’t being used at all. The logical conclusion was as simple as it was challenging: why not just install the Russian line in Poland, instead of investing in an entire new line there? This was the tricky job that Carlsberg had in mind when it got in touch with Krones in early November 2014.

Neutraubling, Germany: Krones accepted the challenge, and began tackling it straight away. The job, however, involved more than just physical relocation. Because for the Russian line to meet the Polish brewery’s requirements, the non-returnable line had to be converted for handling returnables. But Krones had a solution up its sleeve for this as well: the units still missing, like the unpacker, the packer, the crate washer and the full-crate inspector, could be added as pre-owned machines from Krones’ ecomac subsidiary. Carlsberg, however, had an even more ingenious idea:

Kiev, Ukraine: In a Ukrainian brewery owned by the Carlsberg Group, a combined returnable/non-returnable line from Krones was not using its capacities to the full. Because in line with the market’s needs, it was now bottling its beer in non-returnable containers only. Thus precisely the additional units needed for a returnable line in Stettin were not being used here. So after consulting with Krones, Carlsberg decided to use these components for the “new” line in Poland instead of outsourcing pre-owned machines. 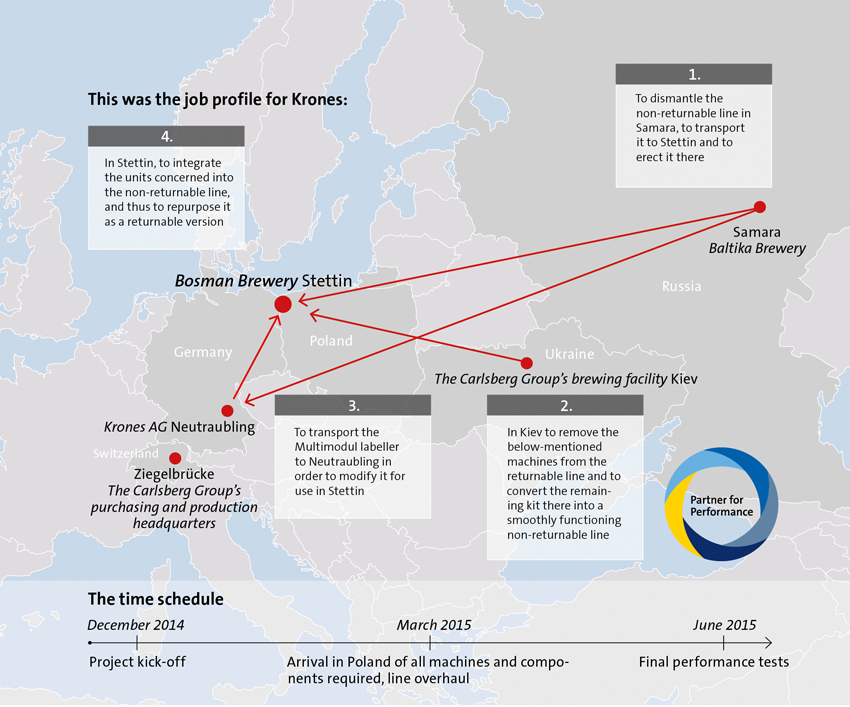 Krones teams in both Samara and Kiev coordinated the loading process, to make sure that all the machines arrived in Stettin on time. One of the project’s critical aspects was this: the machines from Russia and the Ukraine would now be used in the EU for the first time. This entailed consequences in terms of safety engineering: the current EU Machinery Directive had to be complied with. So appropriate safety upgrades had to be designed and implemented for each individual machine. For the labeller, this proved to be so complicated that Krones there and then decided to transport the machine to its plant in Neutraubling and convert it there.

“Reserves and flexibility in the peak season”

Now, the line begins with a Pressant Universal bulk glass sweep-off depalletiser from Samara, and a Modulpal depalletiser, which Krones integrated as a new machine. A Blitzpac packer, a Blitzpac unpacker, and a Linajet crate washer came from the brewery in Kiev. Also from Samara are the Linatronic empty-bottle inspector and the Lavatec KES bottle washer, plus the Mecafill filler with its 130 filling valves. After this, the bottles travel over a lengthy mass conveyor, which had essentially been relocated from the line in Samara, and modified with some new elements to suit the altered line layout. A Glideliner spaces out the bottles before they are fed into the drier upstream of the Multimodul labeller with its three cold-glue stations. Alternatively, the bottles can be packed either in cartons or shrink-packs by a packer, or in plastic crates by a Blitzpac machine. The line also incorporates a total of four Checkmat inspection units: one for inspecting empty bottles and crates downstream of the depalletiser, one for fill level monitoring, a third for label inspection and another fill level inspection downstream of the labeller, plus a fourth for full-bottle and full-crate inspection after the packer.

“I’m really pleased that we’re able to use this additional line, because it gives us reserves and flexibility in the peak season,” says Piotr Fornal. “What’s more, it’s great that it’s once again a Krones line. Firstly, we can use up to 50 per cent of the spares for both lines, with minor modifications if necessary, and thus reduce our stock levels. Secondly, though, we also have the same people to contact for service, which makes our work a whole lot easier.” By the late spring of 2015 the line was achieving an OEE of 51 per cent, thus exceeding the anticipated 50 per cent. And this although during the winter months it was only in operation for some days at a time. For 2016, the target is an OEE of 55 per cent. In future, the line will also be tasked with filling non-returnable bottles. For this purpose, Carlsberg Polska has already placed an order with Krones for new handling parts, the relevant software and an empty-bottle sorter.

Up and running on schedule

“The major challenge we faced in relocating the line was the time factor. We wanted to be operating well in time for the peak season in 2015 – and we succeeded. Apart from the fact that line relocation was also a significantly more affordable option for Carlsberg than buying a new line, with an order for a complete line of new machines we would never have been able to fit the job inside this time window,” explains Piotr Fornal. “Krones is an excellent manufacturer, and sent us a highly experienced installation team. This meant the actual erection and commissioning was completed in just two and a half months. Following the conversion of and upgrades to the machines, the line now feels almost like a new one.”

Wouldn't that be something for you too?